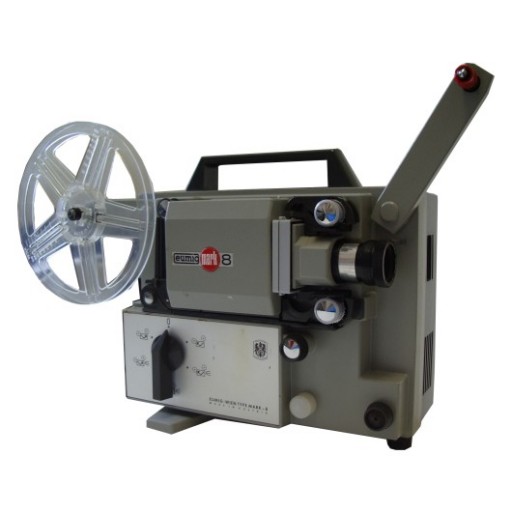 It was Christmas Day 1980 and a big wrapped box was on the floor of my bed. I had opened all of my other presents and now it came down to the last one. The box could have contained anything.
Although I was pretty sure it had what I had been hoping for since 1976 which was my first Cine Projector. Was this to be the start of my journey? I quickly pulled off the red Christmas paper and… It was! It really was a Eumig Mark 8 silent Cine Projector. I think I refrained from shouting ‘Yes Yes’ or Whoop Whoop’.
I do remember though shouting ‘I’VE GOT IT” Not only did I have the projector, I also had three films, a black and white 3 minute cut down of Disney’s ‘Herbie Rides again’ a cartoon called ‘Three Ring Fling’ and another one of which I can’t remember the title. It was still amazing though and I couldn’t wait to go downstairs and start using it.

I went downstairs and my Dad unpacked the box while my Mom got me my cornflakes. He had to stand the projector on the top of the TV, which was easy to move because it was on wheels.
It was plugged in and ‘Three Ring Fling” was threaded into the projector and it was pointed at the wall. Luckily at the time we had cream coloured wallpaper (easy to project onto). My Dad closed the curtains, which was needed to see the film. It was quite a sunny day. All this time our new puppy called Peanuts (A Lakeland Terrier) was asleep on the sofa – that dog could sleep! My dad then turned the handle and yes, I was watching a film on a projector in my own home.
It was amazing. Although I did get into trouble for suggesting that it would have been better if the film was sound. “What do you think I am made of money?” said my Dad. “Be grateful you have got a projector at all…”

For most of the day, I watched my three films over and over again when I could. Then the rest of my Mom’s side of the family arrived late in the afternoon which consisted of my Nan, Grandad, Aunt and Uncle.

I immediately showed them what I had got for Christmas. Trust my Auntie Brenda to make a passing comment which the majority of everyone else understood except me and my Brother who was only seven. My Auntie asked if I had any ‘Blue Films’ which of course meant pornography. Everyone else looking embarrassed. “You know, ‘Blue Films'” she said again. I really didn’t know what she was talking about. Then I noticed I did have a ‘Blue Film’ well the reel the film was mounted on was the colour blue. I picked it up and showed it to her and she just laughed.
After Christmas supper and drinks the family went home and my brother and I went to bed. It probably was the best Christmas Day ever as I had got what I wanted and my journey with Projectors and Cine film began. It was truly a happy day.