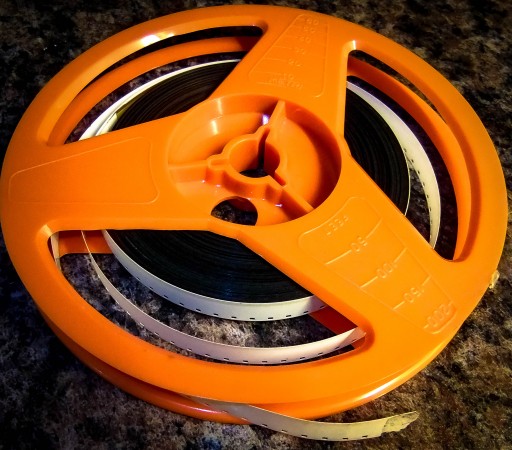 A Spool of Super 8 Cine Film

As mentioned in my previous post in September, I was visited by a client who asked me if I offered a Cine to DVD transfer service. ‘No not at the moment’ came the reply. ‘That is not something I am currently doing’ After being greeted with a little emotional response. I decided that Final Cut Video Editing and Photos should offer a service to transfer old Cine Film to DVD.

To transfer Cine Reels to DVD was going to require the correct equipment and of course this kind of apparatus was no longer available (well not brand new anyway). I did have some experience of Cine Film and Projectors as I had them from the age of 9 years old and continued to enjoy them all the way through my childhood. I was even a member of ‘Lichfield Cine Society’ from 1984 onwards.

Ebay was going to be my best bet to source the equipment and as I entered Super 8 Projector into the search engine, I was greeted with a dream of Elmo’s, Eumigs, Chinnon’s and Sankyo machines. I knew for a fact that Elmo made the Rolls Royce of Projectors and I wanted the best for my clients, so I opted for one of those, with a Bell and Howell machine for the 16mm. Projecting the film onto a wall and just filming the image would provide me with poor results, so I thought that a Telecine Converter would be the better option. This would allow me to capture the film in the best possible way and then I would use my Apple iMac with it’s top quality editing software to enhance the images further.

After several days the Cine Equipment arrived and I quickly ventured into my loft and found my old Super 8 Cine Reels.

What an absolute revelation….! I threaded a 50ft spool into the Elmo projector and I sat back and looked at an old film I most likely had not seen since the early 1990’s! It bought back some real precious memories of my childhood and I began to remember the fun I used to have making them the films, while I was away on holiday and some of the other events I had filmed.

Even though technology has advanced so much in the last 20 years, it is still wonderful to look back at these memories that ‘I’ an ‘we’ once shot on film.

These memories no longer have to be misplaced, forgotten or gathering dust. They can be enjoyed once more in the modern format.

Final Cut Video Editing and Photos can bring them back to life again…..